The show is curated by Sabrinaa Nightfire and takes place at Erato of Caerleon.

Posted by Miso Susanowa at 1:18 PM No comments:

Between moving again FL and being a home decorator, I haven't had time to write, so here's a good piece of news for me and some information about one of the leaders in the arts scene in Second Life:

The University of Western Australia In Second Life has recently become a very important nexus of the digital arts in SL, in great part due to the efforts of Jayjay Zifanwe, Quadrapop Lane and others. There are many well-known and influential arts supporters, curators and artists on the judging boards for the UWA 3D Art & Design Challenge and the IMAGINE and Flagship Challenges; the list of participating judges reads like a Who's Who of art in Second Life.
You can read much more about this important movement by taking the link below to the UWA blog:

UWA In Second Life Blog
On December 7, 2009 I was awarded the first-ever Excalibur Prize, a digital workspace to be provided for 4 artists through the generosity of Phillip Vought, a well-known arts philanthropist. In Jayjay's words:

Jayjay Zifanwe: This prize will be awarded to either new or returning artists, and will be awarded for the breadth and depth of their work, as well as the messages that their works deliver. The Excalibur prize is an award of 1000 prims on Excalibur Aquitaine in perpetuity for as long as the sim exists!

Quite an honor and a godsend, as being a working artist in SL requires land in order to work with objects and keep creating.

In addition, in the December Round of the UWA Design Challenge, I was awarded an Honorable Mention for 'Serenity' for my piece Radiant Stallions. Many people told me how wonderful this piece was to walk through and experience and thas means a lot, because this piece is very special for me in that it was an unthought piece that emerged from simply standing quietly on a beautiful Second Life beach at twilight and letting the sea and sky speak to me.

Not enough said about the UWA above so go read the blog!!! 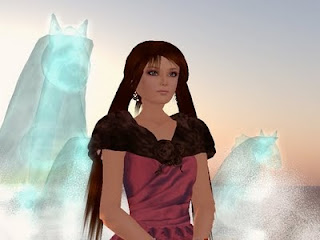 Posted by Miso Susanowa at 12:47 PM No comments: 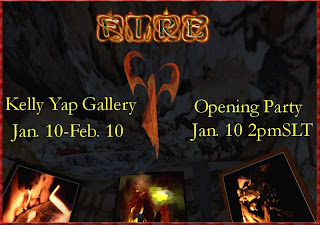 Wear your best Firey outfit to win a 500L Prize!

Firey Outfit winner to be announced at 3:30 pm!