An Adventure With Captain Callidus

Just to show people I am not always boringly working, here is an adventure with Captain Callidus Waydelich, of whom I am pixie niece and apprentice pirate lass to:

The second piece of my RL/SL collaboration with Australian artist Len Zuks is done - Lil Eizenstein SL. This was actually the first piece done for Len as an "audition" piece to bring him into the possibilities of the metaverse and specifically Second Life. I roughed up a quick mockup of his physical sculpture and he gave the ok to do two others: Megabyte and Klein Bottle.

I revisited Lil Eizenstein and made quite a few adjustments to the rough, owing to much better photos of the physical piece and textured with the metals I used from dtetailed photos of Len's own physical work. In giving Lil Eizenstein a Second Life, I added a particle emitter with the E=MC2 equasion which Einstein is justly famous. I also added a facsimile of the first page of his 1915 paper on General Relativity and had that reflect in his spectacles. In the back of his head is a rotating black hole.

On spending more time with the piece and researching Einstein, I began to notice the iconification of the Professor; the carving and commodification of one of the world's greatest thinkers into an easily-packaged yet bland and thin image, even to the cartoonification of him and his ideas (the photo of him with his tongue sticking out).


This cartoon and one-dimensional image of Einstein is at odds with the reality of the young, dynamic thinker who had women "swarming around him like butterflys" and of whom Marilyn Monroe said, "Einstein is my idea of a sexy man." Likewise, "E=MC2" is standard fodder for schoolchildren and a handly little quip, yet this view ignores or bypasses Einstein's later impassioned speeches warning of the consequences of the use to which his theorums had been put and pleading for a more enlightened world and for world peace.

Therefore, inside Lil Eizenstein SL (but very difficult to cam into) is an image of the young, dynamic Einstein. I also turned the base of Len's work into a rotating dome of the heavens, the splendour of the universe upon which Lil Eizenstein sits perched and from whence Einstein felt the wonder which fueled his conceptions.

The dome is also the top of a mushroom cloud... the terrible material use to which Einstein's theories led and which he later (along with Robert Oppenheimer, Niels Bohr and many of the physicists of his day) condemned. So to this work I added snippets of Einstein's famous 1945 Voice of America speech pleading for world peace (reproduced below) which play at random intervals.

When touched, Lil Eizenstein SL presents the avatar with a copy of the first page of the Theory of General Relativity in Einstein's own handwriting, a graphic of Einstein in front of a mushroom cloud with the text of his 1945 speech and copies of photographs of Len Zuks' physical piece, Lil Eizenstein.

Once again, I am very grateful to both Len Zuks for the opportunity to work with his pieces and to Jayjay Zifanwe of the University of Western Australia In SL for facilitating this very interesting collaboration.

* * * * * * * * * * * * *
"Today, the physicists who participate in watching the most formidable and dangerous weapon of all time... cannot desist from warning and warning again: we cannot and should not slacken in our efforts to make the nations of the world and especially their governments aware of the unspeakable disaster they are certain to provoke unless they change their attitude towards each other and towards the task of shaping the future...

Large parts of the world are faced with starvation, while others are living in abundance. The nations were promised liberation and justice, but we have witnessed and are witnessing, even now, the sad spectacle of liberating armies firing into populations who want their independence and social equality, and supporting in those countries by force of arms, such parties and personalities as appear to be most suited to serve vested interests. Territorial questions and arguments of power, obsolete though they are, still prevail over the essential demands of common welfare and justice."


Posted by Miso Susanowa at 8:07 PM No comments: 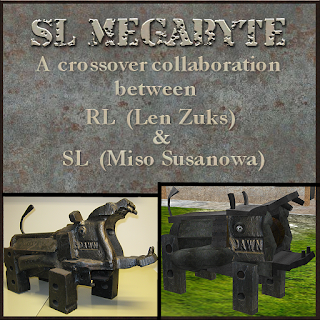 The first collaboration between RL artist Len Zuks and myself is finally done! It has been very exciting to work with Len on bringing his Megabyte sculpture into the digital realm. It is a beautiful, evocative piece and was very fun to work with in bringing it to the multiverse.

Len Zuks is an amazing artist with international recognition. Please check out his website (link below) because there's just so much to tell you about the man and his work that I cannot do justice to it here, merely talk about my own experience in working with him. I am truly honored and grateful for the opportunity to work with such a talent.

Through the efforts of Jayjay Zifanwe, the moving force behind the UWA 3D Art & Design Challenge and most-awesome promoter of the arts in Second Life, I was introduced to Len and asked if I would be willing to work with him on translating some of his work into the digital realm. One piece was done as a test model and was pleasing enough for me to get the green light on two other pieces.

The first of these is SL Megabyte - a reimagining of Len's work through the lens of SL. Here is what Len had to say today in Second Life on viewing the piece:

'The original sculpture was freestanding, tangible and real. With Miso's collaboration, we have given this sculpture an internal life which is real but cannot be replicated in reality'

I'd like to detail my process a little bit here and offer my thoughts on this most fun and exciting collaboration...

* * * * * * * * * * * * *
When I began Megabyte, I started from the point I had with his first test piece, Lil Eizenstein - to reproduce the work in digital form. I had Jayjay take a series of angled photos and closeups of the piece and send them to me.

I began trying to replicate Megabyte with many sculpted forms, seeking to duplicate the shapes... and quickly ran into a wall. Without extensive 3D modeling (Blender or 3D Max or the like) I wouldn't be able to be exact, and it wasn't guaranteed even then, owing to the problems with replicating such a shape, viewed only from photographs.

I sat with him for awhile, clumsily finished and awkwardly placed, through the holiday uproar and just let the sculpture work on my awareness from the peripheral. My breakthrough came when I realized I did not want to replicate Megabyte; I wanted to give him the life that only SL can!

Now things went much better. I junked the sculpted forms and started using regular prims. Using textures made from the photographs of Len's own work, the feel of his metals and the taste of his texturing, I started to let Megabyte live on his own. Certain things were shifted, or gently modified to fit in with the constraints of building inworld. Other things, like the wiggling ears & tail and the rolling eyes which follow you around, are features of everyday Second Life experience and worked in naturally.

The really fun part was several conversations I had with Len inworld through Jayjay's avatar, Len taking over the mic to speak to me directly as we dialogued about the piece. One thing Len said, about an "internal life" got me off onto the thought train of:

This got me started on the interior. Inside Megabyte, I envisioned his life, which was lived in the savannah... and so the concept was born: inside him would be a river, running through the savannah and down to a pool where two hippos play. The river represents his home, his life and the DNA connection.

Along the banks of the river I wanted to put animals. I was reminded two of my favorite pasttimes as a child: playing with plastic animals and the numerous fake Fabergé eggs I made - spending hours cutting pictures out of magazines, glueing them on cardboard stands and carefully placing them inside hollowed-out eggshells with a tweezers (I made these from age 7 or so well into my late teens as gifts for Easter and Christmas). Now I was having fun! I added some animals and an African djembe drum.

As usual in most of my pieces, I wanted sound - a large part of my work in Second Life and one of the things SL excels at: whimsical reality. I began with hippo vocalizations, which play at random. Hippos make weird noises! I added animal sounds to all the animals with one exception - the giraffe. It seems giraffes make... leaf-eating noises. Crunchcrunch -_- So instead I put in a small joke (also a feature in many of my works) - the "sound of a dying giraffe." I also added a touch-start loop of a tribal beat-and-clap pattern to the djembe.

A small opening was left in the roof of his mouth to show a sliver of the inside sky and to clue observers that there was an interior to SL Megabyte. A little bit of clever camming will place the observer inside him to view a panorama of the savannah - a long river winding its' way through to a pool at one end where hippos cavort. Along the river animals stand; touching them will play the animal's sound. The drum allows the viewer to start a looping beat and then play with the animal sounds while the hippo sounds play randomly.

So now, like all of us who come here, Megabyte has been given a Second Life of his own!

A very satisfying, exciting and stimulating project. Both of us are pleased at the results, as is Jayjay, who has told me that SL Megabyte may have a permanent home on the UWA in SL campus as an example of a physical/digital collaboration with one of Australia's finest artists. W00t!

Posted by Miso Susanowa at 12:25 AM No comments:

The UWA 3D Art and Design Challenge, which I have blogged about before, has again honored me with an Honorable Mention for Immersion for 'City (Los Angeles)' about which I have also blogged before lol ^_^ TY Jayjay and judges... i know i should say more but i have a much better blog to do :)
Posted by Miso Susanowa at 11:01 PM No comments: