I decided to see if I could go home again (despite what Mr. Wolfe said) after coming across a reference to a virtual world platform I used to spend quite a lot of time in - ActiveWorlds. The reference pointed me at Michael Nesmith's [yes, he of Monkees, MTV and Liquid Paper fame] site VideoRanch. This is the official site for Nesmith presence on the web; you can keep track of Nesmith's concerts, mp3s, interesting videos, books and merch.

I came wanting to check out the VideoRanch3D world. The software on the site is a bit out of date; it took 6 tries to download all the revisions and the program would not let me in until they were done. It didn't take all that long and soon I was rezzing inworld. The software is pre-coded to log you in to Nesmith's world.

ActiveWorlds spaces have had physics for a long time & the VideoRanch3D is no exception. Some worlds incorporate hardware physics, although not this one. 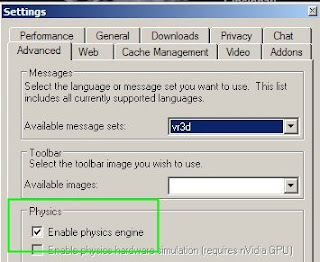 There are a lot of options and controls in the Settings panel, on par with some of the browsers for gridworlds. I meddled with the interface controls for awhile, picking bandwidth, draw distance and the like, refamiliarizing myself with the world controls. At last I was ready to do some exploring. 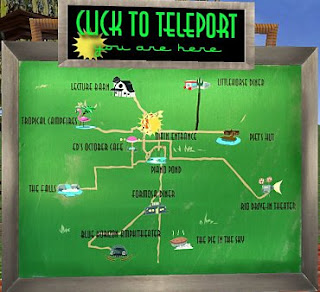 One thing the Ranch does well is layout, with very clear pathways and nice but unobtrusive teleport stations at every major intersection. The ActiveWorlds browser controls are fine-grained and intuitive, with lots of rollover Help. Anyone who has visited different virtual worlds should have no problem picking it up. The program comes with about two dozen default avatars; I picked the first one, Lucy; the second default avatar was Ramona, a subtle nod to Nesmith's tune Cruisin'. 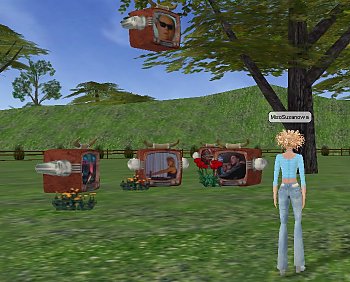 See those TVs? There are about 20; they float around in a big corral... and each one is a video link. You touch the TV & a video plays, with no chopping, lag or interference. I've asked before - why can't Second Life do this? It's 1998 technology; one of the first media extensions that was implemented in AW.  Video on a prim? Yeah, we had that. Notice also that my avatar throws a shadow. 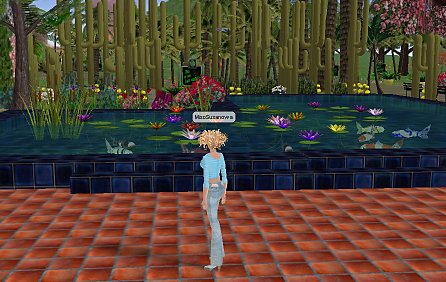 The next area I found was a splended water-garden that I am sure would please soror Nishi as much as it did me. All of the water plants, as well as the fish, are sculpty-like/mesh and look very good. 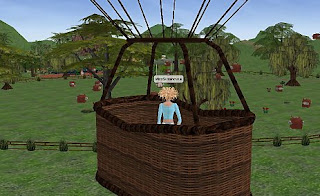 I took the nearby balloon ride for an overview of the world. Worlds in AW are similar to sims in Second Life, and the balloon toured me above the Ranch. The pathfinding/movement of the ride was well-done and glitchless. 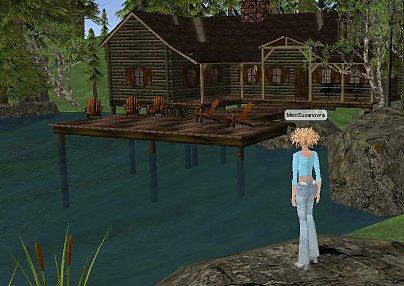 I got off the balloon ride and wandered around, finding some nice builds equal to any in Second Life. One of the differences of AW worlds is that there is no open building; you must own/admin the world to build. 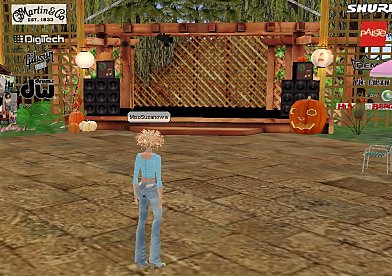 The main stage is very well done and I noticed that the builder is also putting out holiday things. This is evidently where Nesmith & friends do appearances and concerts. Nesmith is engaged in the reopening of this space, tying in a Twitter and Facebook presence. There are a few videos up on You Tube showing Nesmith performing against a greenscreen for these inworld concerts. 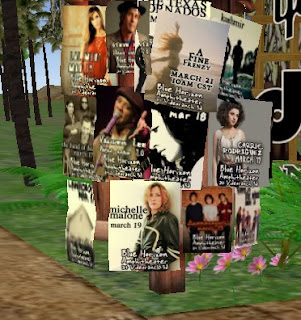 A closeup of a bulletin board/post board told me that there are frequent inworld performances by a variety of interesting people. I met one person, Margy, who told me there was a dj/dance party in a few hours, so I took some photos and logged out.

When I came back later, a respectable crowd of 12-16 avatars had gathered to listen to DJ Linsey do an excellent set of mixed musical styles. I met Rolly, who is a very old hand at AW; we talked about the early days of virtual reality (1995-1999). Rolly is also a Builder in the space who made her own avatar. Many of the people I met at the party were involved in building/landscaping and my impression was that they'd been maintaining this space a very long time; at least as long as SL. This is what 'community' means.

AW Worlds might seem a bit cruder to residents of SL, IWz, OSgrid and the like, but you must keep in mind that this space has been up a long time and is currently in revamp stage. The default avatars show a nice selection, much better than the offerings of Linden Lab, and there is a space for Custom Avatar if you have privileges. Crossing "regions" was smooth, watching videos the same; no lag was found. The music did cut out once or twice, on par with SL/IWz.

According to people I met the second night (with Wizard Gynoid in tow), there are many little "discoveries" to be found on the Ranch, all relating to Nesmith's body of work, including videos from Elephant Parts, Television Parts and Rays.

So, Mr Wolfe wasn't exactly right - you can go home again, but it's different. It was nice to visit Nesmith's world - Nesmith's always been on the forefront of technology and I'm interested to see what happens with this space.

One of my favorite activities in RPGs is creating items. I spend more time at that than gameplay sometimes. I like to understand my character/class, figure out what most aids them in their playstyle and then create awesome items for my avie.

I've been allowed an "approve items" position in Tweeria, the new "lazy Twitter role-playing game" from Tweenk, which is in closed-beta testing now. I get to look at all the player-created items and approve them for circulation. As of right now there are no formal rules for items, so they all get approved in a day or three. Later, rules will cover what can be made, how much power it can have & etc.

What's been interesting to me is to see many people making items and keeping within the feel/story of Tweeria. Lots of creative & interesting descriptions like this: I am a Mage-class character so I make most items with my power-stats; Intellect, Dexterity & Luck. I've also made a few Warrior-class swords & armors emphasising Strength & Hitpoints.

The creativity of the players in creating items is something nice to see. It also keeps the game from being only an RPG treasure-hunt or "collect 'em all" thing. Anyone can craft an item, and the best ones are very-well targeted at the character class, showing a lot of prior RPG gaming & character-development knowledge.

By the way... you can sell your items too! I have quite a stash of gold built up from my creations; they are popular with Mage-class characters. It's nice to see that other knowledgeable players appreciate a well-crafted item & give you feedback by purchasing it. 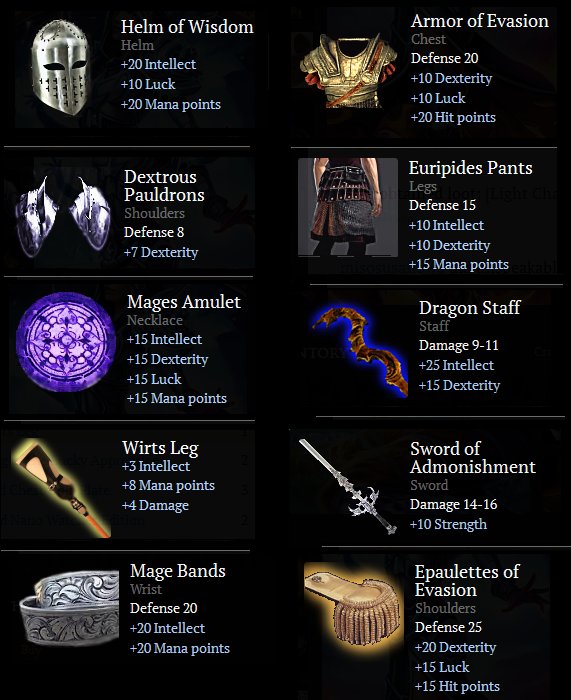 Tweenk and friends have been working hard on the new game; you can read about it on the Tweenk blog.

Even more fun than the original game, Tweeria is a lot of fun to troubleshoot at this point. Lots of features have been added, like Raids, Spell Creation & items for plain old fun (like my Dragon mount). Beta is going well so you should be able to join the game soon.

You can still join the original game Tweenk and get a feel for how the game works with your tweets.
Posted by Miso Susanowa at 3:39 PM 1 comment: