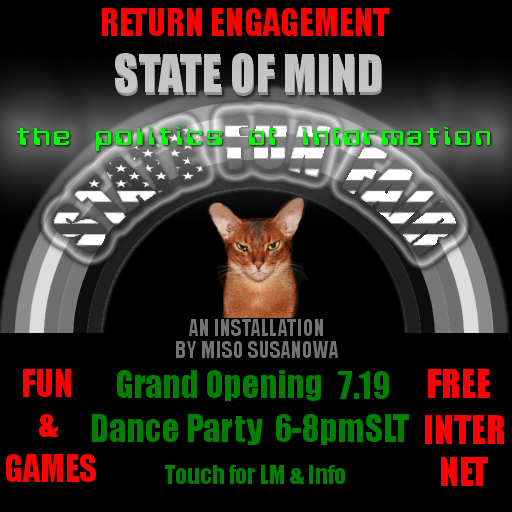 As topical as today's headlines, State of Mind returns with more fun & updated information on security,  behaviour,  spycams, State control, television & the internet. Party with the Illuminati and get yourself some free pork!

Part of the LEA Full-sim Art series.
Posted by Miso Susanowa at 11:41 AM No comments: 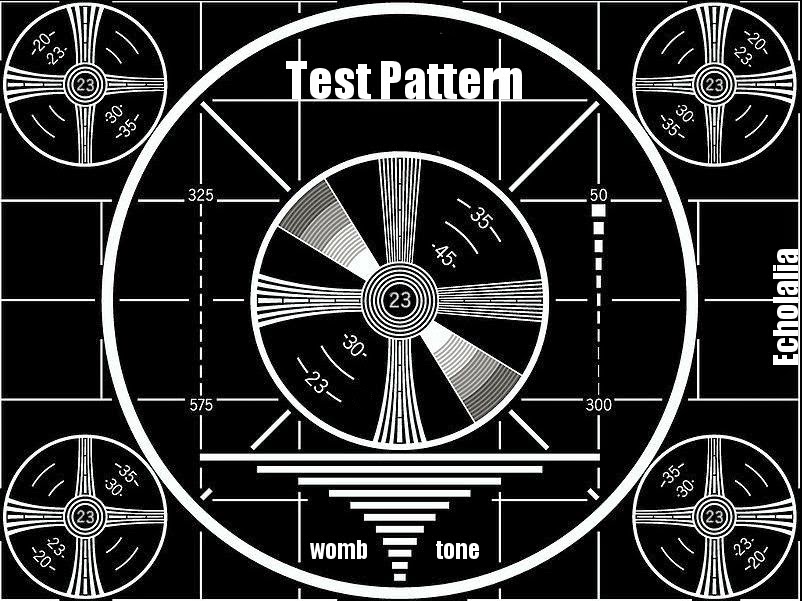 In the late 70s-early 80s I was doing a lot of journeyman work with tape - altered, cut up, drawn out, mangled and so on.

I made a short-run pressing as "Echolalia" of a 45/single, "Test Pattern" which was composed of the A-side "Merlin's Muse #3" and the B-side "2seconds2nonexistence".  I think I sold about 5. I gave away lots. I know some weirdo college stations would play it in the wee hours (including local stations WRUW and WCSU).

Here in all their grainy glory are the compositions, done on cassette tape with scissors, posted to You Tube:

A Reply To David Byrne

I write today as a response to David Byrne' post "How Will the Wolf Survive: Can Musicians Make a Living in the Streaming Era?"

First, my particulars: I worked in the music industry from retail floor to the corporate contracts division at a major music publisher over a span of 22 years. I have seen how albums sell from the bottom to the top. The music store I worked at was in existence for 40 years; was one of the first to play "race music" (aka blues/rock) and fed music to Alan Freed for the famous "Moondoggie" shows that began widespread rock and roll acceptance; we were one of the Billboard 100 reporting stations for sales & charting. I have a lot of experience in this industry.

I'd like to inform David about a music streaming app that existed long ago in the fabled rock generation: radio. Not the radio we have today, where payola is the name of the game & you can hear Talking Heads all you want... as long as it's 3 songs.

I first heard Talking Heads on the radio. I ordered it for our store. It was played a lot (and not just 2 hit songs) over the radio and in our store. You could even tape record it over the radio, and some people did. But generally, people either wanted to buy one specific song ('Psycho Killer') or the whole album ('Talking Heads '77') and became fans, leading to more sales.

Two things happened in the record industry about 1980 that screwed musicians (more than they already were being screwed) - the record companies' plan to do away with the single and to do away with the LP in favor of CDs. We were told that once production lines were retooled from wax to digital/CD that prices would drop. They didn't - so much for that.

Every retailer I knew from New York to California told the companies that they were cutting their own throats with these actions. The single, and radio play, were the two best sources of people ordering new music in a store (I could back this with 20 years of Billboard charts).

Even though radio was a "streaming app" and some people did record it over the radio, that loss was made up by sales of the physical product. Record stores didn't make a lot of money selling discs; we considered them loss leaders. We made up that loss on singles inserts, record player needles, posters & various miscellanies.

What drove customers to our store was a healthy radio network willing to play just about anything (although maybe perhaps late at night) and mouth-to-mouth enthusiasm from customers and DJs. There were many stations that ignored the Billboard charts and ordered their music from us on a hear-so. We even had listening booths, where people could listen to a whole album in privacy if they wanted.

I think of modern streaming sources as "real radio" as opposed to, say, Clear Channel's "play songs only from this playlist supplied by the record companies." Real, diversive and healthy radio drove the sales and concert incomes of bands. More local bands could have a hit single in, say, the Tri-State area (where I lived) and by widespread interest attract people to their shows, and perhaps even "go national."

We need good radio back. This would help many regional groups who could pull of a good single and get airplay for it (another thing the MPAA fails at: promotion), perhaps leading to a contract and more music.

Don't blame today's | streaming radio | for loss of income; look to the majors who hold the contracts. Meanwhile, I will listen to my streamed KXLU internet radio for interesting bands and sounds, for which I will then pay money to the artist in the form of a record/cd sale.

Posted by Miso Susanowa at 1:55 PM No comments: