How to be trolled on the internet

This is how rants, freaking out, misunderstanding & plain old assault on the interwebs happens:

I was interested by a friend's remark about the well-known Skud so I tuned in to see this:

Having this had happen to me before & the embarrassment along with it, I tweeted:

and the reply I got was:

I was tweeting before I got the above: 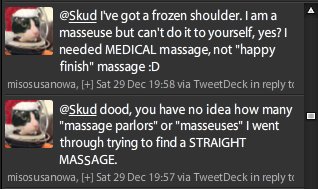 I had damaged my shoulder once and had to have a massage every 3 days to keep it from healing clenched. I must have done through a dozen "masseuses" who said a straight, plain medical massage was fine... until they were inside, me with only bottoms on and their questioning "accidental" fingers... ugh, yeah. It happens more than you'd think.

Evidently this was not of interest to Skud, who then blocked me. However, that didn't stop the hangers-on from deciding this was some rape apologist thing:

But nope, it went further - I tweeted the friend who's feed I originally read the Skud tweets off:

Which was enough for this troll, who I guess was eavesdropping, to leap out of the twittersphere: 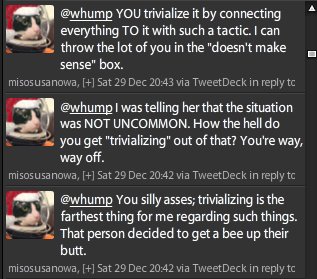 But yet it goes on:

At this point, the way this "rape apologist" worm is taking shape I do not care for at all. Mr Beer Can there doesn't appear to be able to see that 1. I already did apologise for any misunderstanding (tweet #6, above). 2. The ranter blocked me, making the suggestion moot. And now I am pissed off with this bullshit; this is a damned serious charge to be laid on me for a mis-taken tweet: 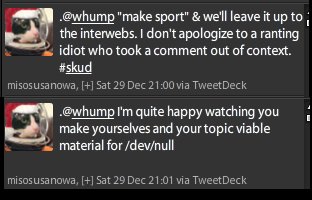 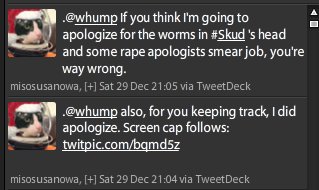 This happens, you know it does; you've had it happen to you. One mis-taken tweet can gain you a rafter of bullshit exactly this way. In this instance, it's a bad slur for me to fight, and I will because it's a really serious charge. It doesn't matter how big a persona on the net is - I won't take a smear job lightly.

This level of hysterics make almost any topic you're talking about into a shrill yapping that brooks no interference. Not so cool. The solution to a word problem is always more words, not silence and repeating the story for your own personal network, destroying my reputation at the same time.

Get off my case, Skud; you took it way wrong, played it up big for your audience then had a few puppets talk back to me. The only reputation you have with me is your words and actions, and I'm definitely filing this one in the "famous assholes who don't think they are assholes" box.