We Are Anonymous - new music 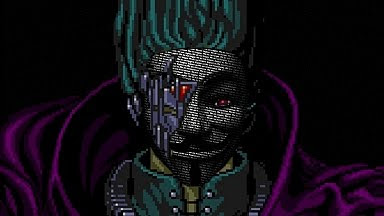 Greetings citizens of the internet
It's been quite awhile since I made some new music outside of virtual worlds, but I've been stimulated to do so by Misprint Thursday, whom I worked with before on the music/video "The Roof Is Gone" for Burning Life 2009.

Misprint has asked me to co-create with her on Indaba Music - a collaboration service for musicians. I'm really excited to work with Misprint again; she is definitely a "Go!" person and we work well together.

The musical tracks at Indaba turned out so nice that I decided to do a mix version of them while they await Misprint's vocals. I am a fan of remixed/extended/alternate versions of songs so this works well for me.

* * * * * * * * * * * * *
The mix I have created is "We Are Anonymous," a tune for the loose affiliation of netizens making headlines lately. It follows my life-long interest in musique concrète & sound assemblage and includes many old sound-friends of mine, including the sound recorded off my own modem in the late 80s - the thrilling, dulcet tones of the SYN/ACK handshake.

The credits on this mix belong to Anonymous, as does the meme mashup graphic above. Both are freely released with a CC license to Anonymous to use & enjoy as they will. Music just wants to be free. F**k the #RIAA.


You can listen to the track in several places:

- Hosted through the generosity of marx Dudek: We Are Anonymous

- on Soundcloud: We Are Anonymous

- As a soundfile on Vimeo: We Are Anonymous


You can also download the high-quality MP3 from Rapidshare:

We Are Anonymous (download)
* A very few people have reported that "Rapidshare makes me sign up for an account before I can download." The Rapidshare interface is not the most intuitive, so here is a screenshot to help you: 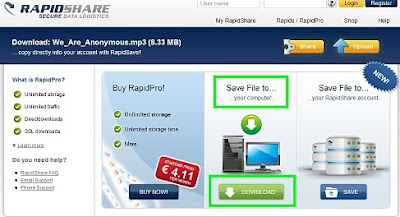 The middle box (which I have outlined in green) is the download link - you should be able to get the song from here without signing up or in or anything. If you can't, please let me know - this has only happened to two people out of many*

I had great fun doing the mix and am really excited to hear what Misprint does with the tracks at Indaba. We are also planning future musical collaborations using/remixing many of the tracks I did for raves in the 90s.

Wow -- "We Are Anonymous" ROCKS!! I hope it goes viral! Can't wait for the version with vocals too. Hugs!