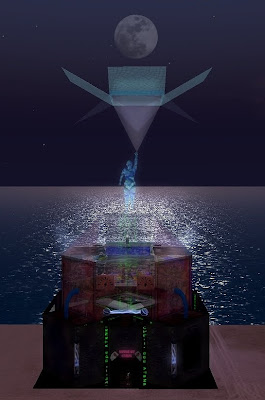 Beginning with the earliest BBS and MUD environments, through the VRML and 2D progenitors of the mid-90s to the current VWs, the birth and growth of virtual worlds and communities is imagined as a tenuous structure: a house of cards.

An Avatar has climbed these shaky and transitive platforms and is reaching for the future hypergrid/worlds.

The architectural inspiration for this piece derives not only from the Tower of Babel in the film but also the Los Angeles California Temple on Santa Monica Boulevard. The second largest Mormon Church in the US and a well-known landmark for Angelenos, it is topped with a 15-foot floodlighted statue of the Angel Moroni which is visible for miles.


The House is both a fond homage to the long path I have taken [along with the Net] in this growth towards the future, and a warning that such technology and such worlds need not only our honest and heartfelt critique but also our enthusiastic wonder and love to survive and grow.


[This installation uses extensive sound as an integral part of the experience and theme, so please have your SOUNDS channel enabled]


All of the worlds shown here are my own personal experience in the growth of social networking. For those who do not know this history, or those who wish to remember or reminisce, the following Floor Keys might be useful:


1st Storey - Iron Age [The hardware-based stirrings of the net]


2nd Storey - Steam Age [The laying of the railroad tracks]

You might hear the ghosts of services past; if you look hard, you might find The Walrus and some Lindens (or hear them).

The quotation on the top Hypergrid is from Stephen King's 'The Dark Tower' - it is Jake Chalmers speaking to Roland Deschain of Gilead.

Working with Xeno was one of the best collaborative experiences I have had in Second Life - very creative, positive, enthusiastic through all the changes; we made our House much more, and much better than originally planned thanks to his involvement.


URL: Event Board for Burn2 in Second Life

Posted by Miso Susanowa at 7:58 PM

look forward to seeing it

I visited it today but found it closed. I´ll be back:)

Ahhh Apmel thank you! You should have knocked - the doors will open!

Not too crowded today so a comfortable walkaround at your site.

Interesting how each level got more transparent (less solid really) one to the next. The ground floor was solid, enclosed, nostalgic, sort of 'been there' feeling. I used PCAnywhere for CompuServe. I think I remember my number. All of those arcane (to me) commands to get around.

Next level, airier but the focus was still on the displays. I used Worlds Away, CompuServe's world. 2D.

Top level below Maria, almost transparent like trying to see into the future. Or making a future. Oh geez, that's deep LOL.

I thought the sign telling you to go to other worlds was funny :)

Tillbaka till Misos House of Cards

Very interesting theme. The Floor Keys is useful!! Thanks a lot from Vesper *memory like a goldfish* Kling. =)

Thank you all for such nice comments :)

June, if you cam out a bit from the third floor and then look down, the House will look like a jewelry box or an origami figure, echoed in the top gridflower :)

Hey Miso! My friend Iggy went to your build today and blogged about it: http://iggyo.blogspot.com/2010/10/another-must-see-at-burn2.html
:)

Thanks Deanya! I will hurry over there!

Loved it. Spent quite some time there, examining every image, every sound, enjoying the overall experience and reliving many of the environments and tools from my past that I had forgotten. And the sounds added so much, an almost overwhelming environment. Quite a nostalgic RUSH! (I'm just dying to say "farrrr out, man.")