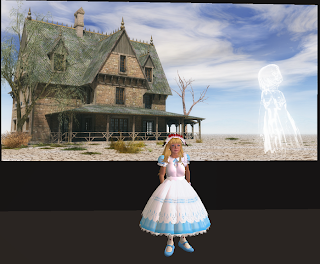 Woooooo have I been involved today! On top of hustling to make my SLb6 project with only a week's notice, I have been up to my neck in the hissy-fit surrounding child avatars...

First though, let me tell you how it started. Today I went to the opening of Feathers Boa's "Forbidden Feathers - Art that has been banned or panned." You really should see this show, featuring very strong and communicative art - yes, art. Not a deliberately staged provocation, but pieces that speak deeply to certain hurt places in myself (and I am sure many others). Two pieces in particular - "Take Me Home" and "Leave Me Alone" could have come from my own dark places and I am very grateful to Feathers for portraying such feelings.

As I have said before, my own childhood included abuses both physical and mental. One of the most insidious tools of abuse is SILENCE - all the neighbors knew what was going on (in fact, we had to move once because of it) but "it's their child; I stay out of it" - Natalie Merchant, "What's The Matter Here?"

So silence about such matters furthers abuse and its' consequent destruction and crippling of a child's sense of security and trust. Such things are a matter of high art - to speak about your life; to show things that others might find in common; to bridge the silence gap and encourage people to speak out against repression, cruelty or horror.

I came as Alice in Wonderland. In case you don't know, Alice has a long and dense history as a metaphor/avatar in cyberspace; one of the reasons she was mentioned in "The Matrix." Alice is old enough to have been in nethack, Alphaworld, and hundreds of science fiction and cyberpunk stories (one especial favorite of mine is "Trouble and her Friends" By Melissa Scott) and usually represents the wondrous possibilities of cyberspace; none of those references run around screaming "child abuse" because clearly, Alice in cyberspace is no child. Obvious, ne?

Not so obvious to certain people...

Even though many people weren't talking to me, I held my ground (good thing Alice has a long skirt; it hid my trembling knees) in the discussion about "forbidden art" and "repression" and "freedom of expression."

Here's some of the nicest parts of that PUBLIC dialogue (no TOS here!)

SaveMe Oh: all are hypocrits here, not only about the mature stuff
SaveMe Oh: take of your clothes and TP in a Linden
Miso Susanowa: then i will have to leave, SaveMe


Feathers Boa: i am glad i'm stirring things up a lil
SaveMe Oh: you are not stirring up anything
SaveMe Oh: we just wondeer what take you so long

Then... she has a go at me (I was wearing my Caerleon tag because I had been building at my workspace on NC)

SaveMe Oh: dont name the word avantgarde when caerleons are around
SaveMe Oh: you could be banned for that
Miso Susanowa: SaveMe, i was gifted workspace on Caerleon, so i use it. If you would like
to gift me workspace for 3 months, i'd use that also
Miso Susanowa: but my beliefs and my mind are my own, as always
SaveMe Oh: if that child avi cames out of your workshop, I rest my case
Miso Susanowa: if you don't know the rich history of Alice as a cyberspace metaphor, may i
suggest reading Donna Haraway's "A Cyborg Manifesto"?
SaveMe Oh: is that the next step?
Miso Susanowa: maybe it would enlighten you

Alizarin Goldflake: i nearly dies of fright the first time SaveMe showed up in my studio
SaveMe Oh: I dont dare it here
Miso Susanowa: well... i have been to prep school so i am not afraid
Miso Susanowa: i got past it

Miso Susanowa: well, i shall leave also, before i disturb Miss Oh any further ^_^

So now let's do a little "deconstruction" on this particular set of dialogues:

1. Miss Oh is all about "freedom of expression" and opines, "censorship is an american national sport," thus showing off her pretensions about fairness, liberality and whatevah.

2. First she has a go at me for wearing my Caerleon tag; a sim where she was banned for being obnoxious and rude, deliberately provoking and... let's face it; "enfant terrible" went out of style sometime in the early 80s.

3. When I hold my own ground (after all, i have been to prep school too; i know a sorority bish when i smell one) she has a go at my avatar... and shows ignorance of any artistic comment, dialogue or message in my appearance, like this, at a show that speaks about child abuse, despite labeling herself as an "artist").

And all this from a person espousing "freedom of expression" and "censorship outrage" at a show designed to show some very dark spaces, many of which happened to a REAL child - Feathers... and happened to me and countless thousands of real children.

As i said, i have been to private school; i'm not afraid of bullies. And sarcasm IS an art; however, the same argument about quality applies to that art as well as the rest of the arts. Slicing and dicing is not good sarcasm; it's just cheap ego shots.

So I hope Miss Oh gets a wonderful dose of her own medicine; it's easy to run down kittens in a Cadillac, but it isn't skillful driving nor very brave. And I don't admire it. And it isn't art :P

Read on next post for Part II
Posted by Miso Susanowa at 4:32 PM

You need a very good spanking

[b][url=http://www.classicuggoutletshop.co.uk/]uggs outlets[/url][/b] Simply the ideal value leather-based can be used concerning louis vuitton monogram zippy coin purse rose florentin m91535 lv purses. Which is why they often search excellent in addition to interesting. As of late a lot of advancements are widely-used in addition to lv makers you should not concern exams as well as engineering together with elements.

[b][url=http://www.cheaplouisvuittonbagsshop.co.uk/]louis vuitton bags[/url][/b] Some are owning fun mixing their appropriate hand rings on just one hand, mixing many rings to get a look that s both remarkable and interesting. Rings fashioned with semiprecious stones undoubtedly are a great way to attain this glimpse devoid of breaking the spending budget. Thankfully, there are an infinite assortment of jewelry designers nowadays who will be producing encouraged, entertaining, lovely and occasionally quirky proper hand rings that suit any style and cost vary..

[b][url=http://www.bestlouisvuittonshoestore.com/]www.bestlouisvuittonshoestore.com[/url][/b] A tattoo is a statement that you just make about your self, your style and believes and for that reason, you'll need to pay for increased attention, especially in terms of arm tattoos. This region on the system is quite exposed and other people can conveniently notice your arm tattoos types and they kind an impression dependant on what they see. In addition, a spectacular tattoo necessitates greater interest and abilities in the tattoos artist when he attracts it simply because he have to render in a very drawing the message that you just want to transmit.

[b][url=http://www.classicuggsbootsshop.com/]uggs boots outlet online[/url][/b] louis vuitton 0 Most women have an interest in buying, plus they are smart adequate, given that they typically know how to get a lot far more of some issue making use of significantly less of the spending plan. Many their own personal subjects almost certainly is often to go above through which can purchase low-cost goods every time buying on the net. Anyone nuts Louis vuitton fans, who will be a breeze factors out which purchasing low cost Lv totes.

[b][url=http://www.classicuggoutletshop.co.uk/]uggs outlet[/url][/b] You can find misplaced doing work without having supervision. You will get lonely particularly if you have to have people today all over you all of the time. You can acquire substantially fat when you are not on an workout software to be the urge to stop with the household cooking area quite a few situations a day is too tempting.